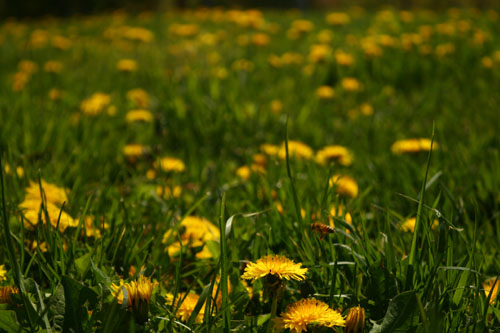 As I was making breakfast yesterday morning and chatting sweetly with Donna about the difference between naughty and nice girls, out of the corner of my eye I suddenly noticed my youngest brother running back and forth in the yard through the windows. Now, if it had been any other individual I would have questioned what they could possibly be doing, but seeing as how this was Johnny, I didn't think much of it and turned my attention back to the breakfast and the conversation at hand, happy to hear Donna declare that she wanted to be one of those 'nice girls'.

A moment later, my breathless brother burst through the front door with one of his wild random questions of which I am never prepared for.
"Mary," says he, "how many dandelions do you think we have in our yard?" I lift my eyebrows a notch at the obscurity of the question, but play along with my part; "How many?"
"Two hundred seventy," says he, with pride.
"Really?" says I, sincerely surprised, as I recalled his count to me just a day or two ago had only been seven. "Yes, well, I'm not sure because I got mixed up at like, a hundred and forty eight but then I knew I had been counting for a long time so then I just decided to call it two hundred and then I counted sixty two from there and yesterday I had counted the ones in the back yard and there was like eight so it's two hundred and seventy."
My head was spinning with his logic and math spewed out first thing in the morning.
"The bees will like that," I mention, off handedly.
"Well, actually, you want to know why I've been counting all our dandelions?"
"Yes, why?" I ask, genuinely intrigued.
"Because, I want to have a dandelion war!" says he, with excitement ringing in his voice.
I pause in my chopping. "What's a dandelion war?" I ask.
"It's where you get a bunch of dandelion heads and pretend they're like time bombs, you know, and you throw them at each other. I wanted to play it yesterday, but Lizzy and Michael said there weren't enough dandelions bloomed yet."
"Well," says I, wondering why nobody ever taught me the dandelion war game when I was younger, "but then the bees won't have as many dandelions."
He pauses for a moment to consider this, before charging on: "Well, Mary, we'll only use like, maybe seventy, and then the bees can have the other two hundred. I think two hundred dandelions is enough for the bees."
"Okay," I answer, while checking the egg baskets in the windowsill. "Johnny, did you get the eggs yet this morning?"
"Um, I checked just a few minutes ago," says he, hands in his pockets, as he walks over to the back door window and rests his forehead against it. Donna hurries over to the window and imitates him. After a pause, where they're standing there, foreheads against the glass, looking terribly cute, Donna interrupts the precious moment with: "Ticken!" She points, bending a chubby finger against the glass and giggles. Casting a glance over their heads, I notice a yellow hen pecking around the back door. "Oh yea!" says Johnny suddenly, bouncing off the back of the window with his head and straightening. "That hen has a nest by the root cellar! Donna, do you wanna help me find her nest?" he kindly invites his little sister, opening the door for her. "Yeah!" I hear the sweet and excited response.
A few moments later, I glance out the window to see Johnny, little sister at his side, waving a finger at the grass, obviously counting. I can't help but grin to myself, thinking he must have already forgotten his original quest. But, a minute later, he proved me wrong as I turned around to him handing me a big warm egg with a smile on his face.
"Two hundred and seventy eight," says he.
My next glance out the window showed Johnny happily pulling his giggling little sister around in an old red wagon. I can't help but grin to myself. Country kids. 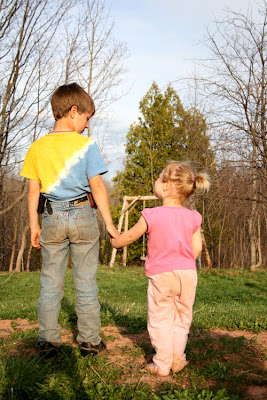 [Note: this morning Johnny has informed me that there are too many dandelions to count. He estimates around 3,000 but lost track counting in the hundreds somewhere.]