For this week's Handmade Holiday, we're going to be making foam darts (or bullets as the kids like to call them) with (or for) kids! This is a design that Theresa and I invented last Christmas when we needed to make a really quick, but cool, toy to stick in all 11 of the stockings, just days before Christmas. With lots of trial and error, we developed this design and quickly drove the siblings nuts when they overheard us having a blast in our room, jumping off the beds, as we tested these out, shooting them at each other! :o)
"Just wait till Christmas!" we answered the whines coming from the other side of the bedroom door, before going back into attack mode on the sister across the room.
As you can imagine, it was a pretty rowdy Christmas morn when everybody discovered their own colorful weapon in the bottom of their handmade stocking. Lots of games were quickly invented and lots of rubber bands broken by the next day. You could usually find one or more bullets stuck in the Christmas tree at any given time, if the need to defend yourself suddenly arose!
So here we go. These are our own family invented 'Foam Bullets' or 'Indoor Darts'.

The supplies are pretty simple to come by... You'll need:
-One package of colored craft foam (ours is left over from last year).
-A hot glue gun (make sure you have lots of extra glue sticks on hand. These use a lot!)
-A pocket knife that includes; a knife, flat head screwdriver, and a pliers (if you don't have a pocket knife, simply collect those tools individually).
-Rubber bands (the newer the better, if they're worn or dry they'll break quickly).
-Scissors.
-A Pen.

(Try not to be too distracted by the mirror on the desk... We only have one of everything! :)
We used two colors of foam for each bullet. Have the kids pick their two colors.

Fold the main color (what will be the base) in half lengthwise and cut on the fold. (The other half can be used for another bullet base.)

Lay the pen on the cut edge (it should be the longer of the two edges).

And tightly roll up the pen in the foam. This can be difficult to get tight, so you may to help the child out here.

Hold it shut for 30 seconds or until it holds.

You can have a little person pull out the pen. :)

Now, here we have our main color rolled into tubes and our second color ready to make the fins and tips. We also have a rubber band for each.

Now you're going to make a horizontal slit about a half inch from the top with your knife. Stick it down hard enough that it goes all the way through so you can see a little mark on the other side. Turn it over and make a second slit on that mark.

Cut your rubber band open. Using the flat head screw driver, force the ends of the rubber band through your slits. Try to push them in at an upwards angle.

You can use your pliers to pull the ends out if you need too. (Sorry about the blurry pictures. Over eager--too close, 8yr photographer here!)

Tie the rubber band ends together like you would tie off a balloon (wrap the ends around your finger to make a loop and then stick the ends through). This can be tricky as the rubber band is going to be stretching all over the place on you. This is the one step that I have to do for all of the kids. :)

Pull the knot down into the tube and cut off the tails so they don't stick up (like they are in the picture!).

Cover the knot (pretty much fill the top) with hot glue.

You don't want the glue to be sticking out though, as it could be rather painful. Hanging down inside there a ways is best.

Cut a thin strip from your second color of foam for the tip. (Note the sweet pea making faces at herself in the mirror! :)

Using hot glue, wrap the strip around the top of your the tube, covering the slits where the rubber band enters. Make sure your rubber band is pulled, just lightly forward (you don't want it to stretch), away from the tube.

Next, lay the tube on your foam and draw a rough fin shape. Cut it out and use it as a template to cut two more.

Doesn't need to be perfect. These things will fly with pretty much whatever shape fin the kids make for 'em.

Glue your first fin on the seam of the tube (hold it straight up vertically, not like I'm doing here!).

This is the easiest gluing job for the kids to do on their own. Still, they need a lot of supervision so they don't burn themselves or cover your desk in glue (yup, experience talking!).

Lay a strip of glue for your second fin and stick it on for 30 seconds (be careful to hold it still--don't tip it in any direction or let it slide up or down... this can be difficult for antsy little boys to do!).

You want the 3 fins spaced evenly around the tube, but don't get picky, just eyeball it.

There you go! Finished and very blurry! :-P

Now, you shoot these doohickeys as you would a normal rubber band: place your pointer finger in the rubber band and stick your other hand pointer finger inside the tube end, pinch with thumb, pull back, aim, and let go! (Wait for them to be completely dry before you try and shoot.)
When the glue is dry and no longer hot, you can let the real little ones at 'em with some markers or stickers to decorate.

When the kids realized they could make these on their own, there was no stopping 'em!

This is a very good interactive craft, as you need extra hands to help, but even youngsters are capable (as long as they don't burn themselves on the hot glue!).

The atmosphere in the room is very pleasant when everyone is working and helping each other out... Donna totally picked up on it and started getting really sweet toward her big brother! :)

:)
So, what are you waiting for?? Invite a bunch of kids over, put on some Christmas music and start crafting foam darts! Then when everyone has one, let the games begin! You can play any game where tagging is required and replace it with dart shooting. The kids like to pick someone to be 'it' and have 'it' start in one room and try to get to another room without getting hit by someone hiding with a dart along the way! (Usually poor 'it' gets a few darts ;).

There you have it! Be creative, have fun, and happy handmade holidays! :)
Check over at Tonya's Plain and Joyful Living for the Handmade Holiday blog linkup every Mon.!

Good Morning, or, more accurately, good evening, but these pictures were from this morning, so pick which ever greeting you prefer--today I'm offering them both! :)

Ours was a nippy morning... A crunching under my shoes caught my attention as soon as I stepped off the porch, but it was not for a covering of leaves, as has been the usual reason for any crunching lately, but rather, a heavy frost that was making the sound. My footprints trailed behind me in the frozen grass. I noticed the frost had been very thorough in its coverage, even climbing vertically, to cover the buildings, cars, trees and everything in its path.
It seemed as though the animals--their little puffs of steam lifting softly off their nuzzles--were the only things left uncloaked by the sparkling whiteness.

The kids came in, nothing short of refreshed and rejuvenated, after completing their farm chores in the nippy freshness of the morn.

Feeding some spoiled and beloved bunnies...

Feeding chickens.. (the guinea keets clean up the spillage after Johnny extracts some grain from the  large bin to soak in five gallon pails).

Johnny has been insisting we get out the winter garb soon... after that it will be the shovels and sleds, shortly followed by, "when are we going to get our Christmas tree??"
(Can you tell I know this boy's seasonal anticipations quite well?)

A cow waits for Michael to deliver his morning minerals...

Some fuzzy horses and mules. We're glad to have a recent sale of one of our mares, as well as securing a new and more comfortable home for our blind mare, before the harshness of winter sets in!

The only boy in the pasture... can you believe he's almost three already? Seems like he was just born!

Despite the innocent looking face, this mule is terribly evil!! The other night when we were out riding, she suddenly came tearing up the trail behind us and spooked all of our horses. Thankfully, no one was hurt, but we're growing more than sick of her fence jumping antics!

The tomatoes and peppers have all been killed off by the frosts outside, but thankfully, those lucky enough to be sown inside the greenhouse are still quite fresh and unharmed by the heavy frosts (despite not even having a heat source in there yet!).

While most of the leaves have settled down onto their respective places on the ground, there are still a few patches of lingering color, which continue to delight our eyes on our daily walks!

Signing off now with some of the boys photography fun.. 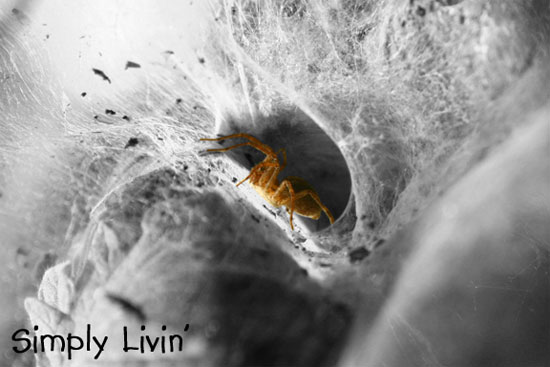 Michael's Nothern Lights (weren't uploaded when I made the last post).

Stunning... enough to draw the whole family out into the yard in short sleeves and socks!

I've been immensely enjoying the simple everyday joys of the season: bringing in firewood for a crackling fire, knitting, hauling manure, hoeing weeds, helping youngsters with school work, carrying Donna piggy back on a fall walk, horse back riding through woods, fields and streams with the kids, talking to God alone in the woods with the song of birds around my head, doing crafts with the kids, Donna's hugs and declarations of her "best brother" (I keep telling her I'm her sister--doesn't seem to make a difference), the chatter of young excited voices as they play hide and seek on a rainy day, with Donna's adorable attempts at counting and pathetic attempts at keeping her eyes closed...
As I write this up, it's striking me that these joys aren't so everyday for most people, and I realize just how immensely blessed I am! Some days there's nothing I can do but sit back and be awestruck and humbled by the simple beauty of life.

Enjoy these lovely fall days and thanks for dropping by! :o) 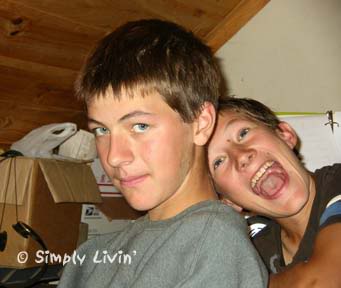 I just had one of those 'brothers are like owls' moments... 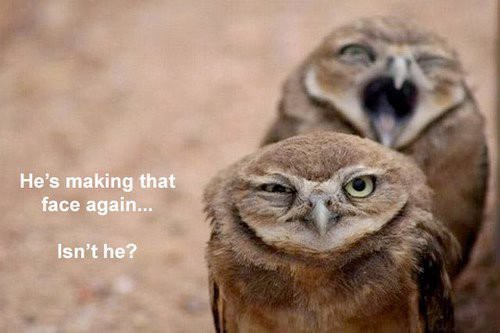