Why is it that, when doing these photo shoots with the kids to show off our replica Lord of the Ring's toy weaponry for our shop, I'm always struck with the kind of acting ingeniousness that share this household with me! LOL 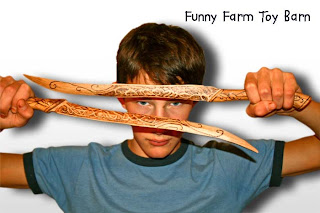 They strike their poses without any direction, and the camera shoots. Then I'm left to edit the pictures and scratch my head, wondering what kinds of scenes those creative imaginations had running behind those facial expressions! 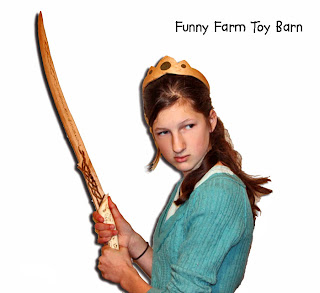 It's not too difficult for me to guess... I've walked around plenty of corners to see imaginary swash buckles going on with invisible opponents. I've seen chickens leap out of the way as Johnny charged through their gathering chasing down imaginary enemies lots of times. I often hear muttered, "here they come!" and "there's too many of them, quick, hide!" as the hero dashes behind a nearby tree. 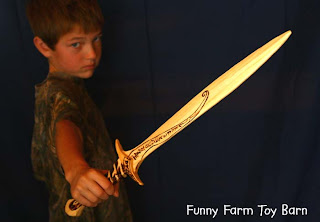 It was their love of the Lord of the Rings movies that had Michael making these LOTR replica's for them to play with. His attention to detail eventually had friends requesting them and finally I asked if he would make one, Johnny's favorite, for the shop. Needless to say, the rest is quickly becoming history! Mike's Lord of the Rings toy weapons are gaining a lot of popularity for their uniqueness. He has several more designs that he's working on perfecting to go on the shop. Any suggestions for him, please share! It's a craft he really enjoys and takes a lot of pride in... he doesn't ship out anything that he can't first wave under our noses as his "best sword yet". :-) 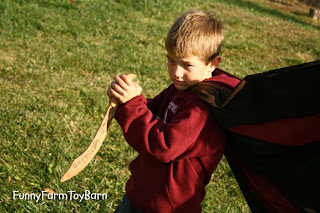 Just today, I was recalling this video that the kids made as a fan film of Lord of the Rings... Ironic, I know, that a bunch of natural born actors, LOTR weapon craftsmen and big LOTR fans, should make a LOTR fan film, but they did! ;-) 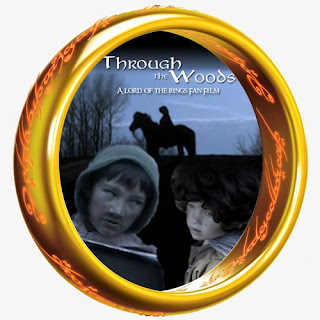 If you haven't seen it yet, it's worth the watch!
Go HERE, click on "Movies" on the sidebar and then "Misc". It's the 2nd movie down.
While we're on the topic of movies and natural actors... I have some very exciting news to share!!
Lund Family Productions just won their first ever commercial competition!! We filmed a segment about living more green for a company. Our constraints were 45 seconds of time allowed, as many green ideas as possible in that time and humor or something people wouldn't quickly forget. We also found out about it just 2 days before the submission deadline. I am still in shock that, out of 60+ competitors, we won FIRST! A staggering grand prize of $5,000!!
YEEEHHHAAAAWWW!!! :D
See the prize winning commercial HERE.

Bottom line:
I guess these ingenious little actors and actress siblings of mine are starting to have their efforts pay off! ;)
SO...
What should we film next??
:)

Happy New Years Eve! Stay up and do something ridiculously silly (but safe!) for me tonight! :) Because I am going to be sleeping! Ha Ha!! :D

Guess what?!
This family has a new puppy!!

Meet nameless: (too many suggestions and opinions in this family!)

It's so fun to have a playful puppy join our crowd...

We were feeling a little stagnant... all our animals and kids seem to be getting too old and boring. ;)

She resorted to what she used to always do before she got married: get a new pet!

She is an English Shepherd.

Molly wasn't too thrilled at first, but she's now getting used to her rowdy new roommate.

She's settled into our loud, busy household faster and better than we were ever expecting.

She seemed to catch on pretty fast, that all these people were going to spoil her, dote on her, feed her and play with her whenever she wants. It seemed like a fun realization for her! And all this space, and these interesting animals and stuff to do and smell... she really seems to have no homesickness whatsoever and couldn't be more playful and happy!

She seems like she's going to be a good fit with our family. We're all really happy with her and love her to pieces and she seems to like us a fare bit too. :)

Some name possibilities are Anya, Roxi, Milly, Keia and etc, etc. It's really hard to get all 11 opinionated members in this family to unanimously agree on one name!
What do you think? Any name suggestions to add to the mix? :)

The Taste of Christmas

Christmas is over, buts scents and flavors are continuing strong!

The girls have still been baking every day, sometimes twice a day...

Holiday treats were difficult when we first started going natural and healthy in our eating, but over the years we developed our recipes and methods until most of our treats replicate ordinary cookies in every way, except that they are more satisfying (you can't eat more than a few in a row) and they are just tastefully sweetened (not crystallizing your mouth from sugar at every bite).

In fact, these have no sugar in them at all. The frosting is a honey-sweetened cream cheese/vanilla and or chocolate.

These chocolate frosted peanut butter cookies don't even have any wheat in them! The grains are all very rich in nutrients, yet the cookies are light, chewy and yummy!

After two failed attempts, the girls are still trying to get a natural ginger bread house to work, as they had a few years ago. Pieces set aside for its construction today...

Yesterday, Donna and Theresa made popcorn balls together. :-)

So, really, a few of these healthy cookies and a glass of milk could be a complete meal... not that I've ever done that. ;)
Anyone interested any of the girl's recipes, just ask and I'll get them on here to share. :)

It is with full contended heart and stomach ;) that I compose this note of summary of our little handmade Christmas celebration for you.

If ever the notion existed, that an exclusively handmade Christmas wouldn't have your children as hyped-up and excited as a store bought one, Johnny did full well to disprove that notion in the weeks and days leading up to Christmas!

Lizzy and Mom did most of the baking together, (we lent our help here and there as time allowed) and their combined efforts led to a beautiful spread of goodies set out as our party on Christmas Eve began.

And what party isn't complete without a little wine? Our own, homemade apple wine--really good!!

We started with celebrating the birthday boy, singing and having Donna set him in his crib.

Then on to the gifts! Andrew got his first, simply because Donna was dying to give it to him!
A hand stitched leather wallet with his initials on the front. Now that he's driving, he needed one.

She got a beautiful truck and horse trailer set!

Michael made the truck for her, so he got the biggest appreciation hug of the night!

Then Michael opened a binder for his bass tabs, including a hand painted cover, a bunch of new songs to learn, organized tabs and a pretty colored picture in the back from his youngest sister. :)

She got a light box for drawing on, with compartments inside for paper, pencils and erasers.

Johnny got a painting set, complete with some new paints, a bunch of paint by number pictures that Annie drew, and a horse that Theresa carved for him to paint! Of everyone, he is by far the most enthralled with his gift this year. :)

Pretty little Lizzy went next, with a very funny shaped gift placed in her lap...

She unveiled a beautiful bentwood princess crown and an Arown LOTR sword with elvish wood burning. (They must have caught her admiring the boys Lord of the Rings weaponry a few times!)

A case for a new electronic gadget our family is going to be acquiring...

Annie and I got a big combined gift. Half was wrapped for me and half for her. :)

Aaaand, we discovered a two player pinball game! They completely made this up, and it works AMAZINGLY well!

This game has been in constant use since it was unwrapped...

A family game that Dad (purchased) was also getting a lot of attention.

We stayed up way too late playing all these great new games!

Somebody was getting tired...

The next morning had us up early as well, as someone had filled our stockings in the night! We had to wait around until Donna woke up though... (Note the Spirit pony and natural fencing pieces sticking out the top of Donna's little pink stocking there on the end!)

(Oh! And there's Theresa's horse carving for Johnny's paint set, sticking into the middle of the picture on the right hand side. It's not a representation of it, but it's a great carving!)

Yay! She's finally up and just as perky and excited as ever when she discovered her plump stocking!

Everybody enjoying their simple finds...

Dad got a back scratch-er and a plastic canvas stitched Beatles desk organizer while Mom found a hand whittled spoon and spatula and a Christmas hot pad from Lizzy.

A hand turned yo-yo with favorite super hero's wood burned on the sides.

A hand painted shirt in my stocking! I'll be self promoting everywhere I go now. :D

A hand knit, lined packers hat for the photographer.

Finally, we had fun last night putting together our Christmas picture for 2011:

Christmas day may be over, but it's still the most wonderful time of the year! :D
The sun is reflecting blindingly off our freshly fallen snow this morning and Christmas carols are still slipping loosely from every mouth. Cookies are still around with a surprising abundance (even our teenage brothers were no match for the size buckets Lizzy was squirreling away!) and more are being baked today, as the other girls who didn't get a chance to bake last week are having a go at it.
We had such a wonderfully productive Dec. month in both of our online shops! After we opened our handmade gifts, we had to sit back and think of the 50+ children around the States (and world!) that were unwrapping and discovering our handmade toys under their trees yesterday. It's a strange, but wonderful feeling! Sure hope they enjoy them as much as we always have! :-)
We have a few orders to fill in the shop, but after all the busyness, I think I'm going to let the kids take today off and enjoy the sunshine, fresh snow and their furry animal friends outside...
Merry Christmas season to my dear readers, and have the best new year of your lives!! :)