Okay, so, I admit it, hopping on a bus and driving for 24 hours isn't something we do very regularly... at all... ever. Hopefully, our country bumpkin-ness didn't show too obviously to the people around us. We may have gotten a few raised brows when we were craning our necks in the bus windows in an attempt to see the tops of some sky scrapers. I don't know if the fellow sitting behind me realized I was counting vertical windows when he saw me shaking my finger at that one particularly large building when our bus was stopped at a red light, and I had to wonder if the fellow who asked the girls to take his picture in Tulsa could tell that they had never held an iphone before... Other than that, I think we managed to travel pretty incognito with the crowd... unless the singing of Christmas carols and knitting on the bus gave away our country-bumpkin identities. ;-) Oh well, what can a person do? Old habits die hard. We have to do something with our fingers and we don't know how to text! :)

Our time spent in Oklahoma was absolutely wonderful, and totally made up for the bout of motion-sickness I had on the bus in the middle of the night. :)

Julia decided to have her reception in a tent set up on the field that she and her fiance fenced in when they were just getting to know each other. Thus set off the simplicity and handmade feeling of the whole wedding, mostly focusing on the beauty and charm of their enduring, fairy-tale-like relationship. 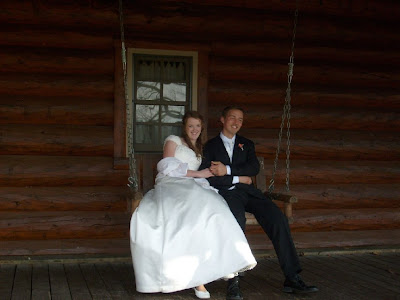 We all whole heartedly agreed after the big day, that that wedding will be going down in history as one of the most beautiful, romantic, sweet, innocent and most perfect wedding days of all historic time. We were SO happy to have been a part of such wonderfulness. :) We had never been so closely involved in a wedding before, and it truly felt like siblings were getting married, as we witnessed them reciting their vows to each other. 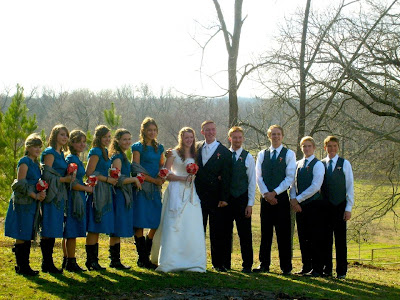 The wedding preparation was all done with the feeling of a party atmosphere. Even when things didn't go as planned, there was still cheerfulness, singing and joking.

The dancing was live folk music, piano and toe-tapping fiddlin' with a caller for some wonderful, old fashioned dancing. And, oh my, was that fun!

We stepped into the week only knowing the bride and groom and left feeling like we'd acquired an adopted family. The hospitality shown us was beyond flattering!

Of course, we took a lot of pictures and videos for our lonely big family waiting back on the farm, but as soon as I started going through them I realized this post would quickly end up huge so I decided to put them all together in a video to ease things up, computer-wise. I hope the video works for all of you who care to see it! Unfortunately, the pictures lost a lot of quality being compressed for video, so they're very blurry. Watch to the end to see some of the folk dancing! I sat out of (just one) dance just to record some of the fun. :)

Our stay was just the right length of time--by the end of our visit, our family back home was missing us badly and we were missing them. As we were preparing to leave, Michael did the math to see how many miles, feet, and then inches away from home we would be. Of course, he then taunted us with his large digit answers, but I took it as his boyish way of saying he was going to miss us badly. :)

Now, we're home and my mind keeps spinning in little whirlwinds like the swirling snow outside as we are trying to prepare for Christmas and keep up with our shops. Tomorrow is Donna's 3rd birthday so we're cleaning and making gifts for her, and we have a giant tree leaning in the corner of our living room, waiting to be stuck in its stand and decorated. The boys brought it in last night before this blizzard hit, but they've been out in the shop making Little House dollhouses all day and haven't had the chance to properly put it up yet.

---This post is getting posted a day late due to the video not compressing properly yesterday. Today, Donna is 3 and our tree is standing up straight in the stand, though yet undecorated. The snow is still falling and the boys are still building little house dollhouses out in the shop. Tonight, Donna will be opening some homemade gifts and our tree will hopefully get decorated, so I'll be back sometime later this week with pictures from those memorable events. :) Merry Christmas!! And since I can't say it enough, Merry Christmas again!! :) ---