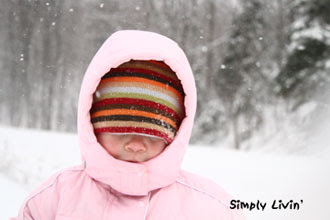 With it's chilling breath, icy cold fingers and absolutely beautiful displays outside, winter has yet again made its annual appearance around here. Even after so many long months of winter in a year, I'm always reminded of its beauty all over again through the eyes and excitement of the little kids. This year was Donna's first to be able to go out and actually play in that pretty falling white stuff... and now we can't get her back in!

Oh, and gotta report some loose screws in the 7yr old's head... no surprise there, but he was wearing appropriate fall clothing up until the white stuff appeared, now he's traded out his jacket, thermals, even pants (!!) for shorts and a Tshirt every day! Yup, when I say loose screws I mean really rattling around in there. He runs outside to check for eggs in his shorts. Freezin' reason, logic and even begging won't change his mind. I finally told him he's being stupid to which he responded, "Mary, I'm being a yooper, what's stupid about a yooper?" ...I think my long blank stare was probably nuff said.

As Andrew reported we got the roof on the barn just in time, but the shed over the root cellar was walled up as the snow blew 'round. Regardless, it was completed by the third snow day and we were able to house our bikes and tools in the nick of time. 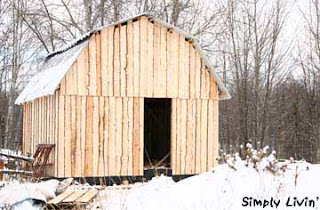 Despite our late fall scrambling to finish the barn, all of the pre-winter chores were completed to my amazement and, I do have to credit some of it to my bossiness. :) With only a handful of days, we managed to harvest and process the end of the garden, weed and cover with wheel barrels of mulch 32 garden beds, clean up both barn and root cellar building project sites, as well as a whole homestead full of tools, buckets, tarps, scrap wood, toys, well you get the idea. :) We finished the morning of THE day it started snowing and I haven't seen the ground since. Wheew!

So now we're sitting inside panting and mopping our brows as we watch the snow flying past our windows outside. The smell of roasting turkey, the crackling of the fire, the sip of hot tea, the sounds of little voices playing happily with each other and the promise of a long cozy nap invite a body to settle down and relax. One of those moments where ya sigh deep and and let go of the breath you didn't realize you had been holding. :)

A very happy thanksgiving ya all!
Mary

p.s. Some people bemoan never seeing the sun in the winter and while that's true, I just wanted to letcha know that my plans for a nap may be bashed today due to the fact that it's blinding bright in the house right now! I'm oh so thankful that snow is white! 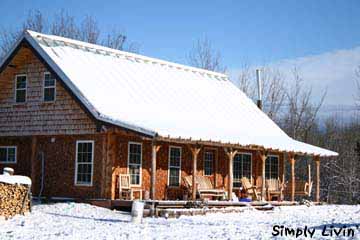 And just in time for the snow, too! This post is being written by me, and "me" being Andrew, just so you stand forewarned...

This was our summer project.. A 16x25 cobwood barn. We plan on putting a small rocket-stove greenhouse in front. The warm attached greenhouse, plus the critters' body heat will hopefully keep the barn at a comfortable temperature for chickens, goats and an occasional calf or sick animal. The goal was to build the structure with the leftover cordwood from our house for as dirt cheap as possible. So far we haven't spent more than $500-$600 on it. We also experimented with a few new ideas along the way, using the barn as kind of a test project for load-bearing cobwood walls and a shallow sandbag foundation.

We excavated the site by hand and dug a trench, about a foot or two deep and a couple feet wide for gravel and drain tile. You can see the first course of gravel-packed tires under the sandbags. The bags could have gone right on the ground, but the tires offer a wider footing and I basically wanted to try packing a few of them earthship-style. It's a lot of work, and I wouldn't do it again unless I was building a foundation with nothing and had no bags available.

We wrapped the sandbag foundation with plastic erosion control netting and plastered with a cement/lime/sand mix. We were too cheap to use chicken wire or stucco lath, but the netting was a bad idea for this application.. Too flimsy and too dense to let the plaster key in; perhaps a heavier plastic fence/netting would make a better cheap alternative.

The cob mix was clay, sand, dried and shredded horse manure, chopped straw and some dairy products to improve stickiness and workability.

For anyone who's unfamiliar with cordwood building; you build with firewood sized pieces of logs (16" usually), you leave a cavity in the center that is filled with sawdust/lime or some other kind of insulation to prevent the cold or heat to wick right through the wall. Cordwood is typically done with cement, but we've chosen to build both our house and this barn using cob as our mortar for the sake of keeping this more natural and breathable (not to mention cheap!) We've not been disappointed! Cob is amazing!! :)

The rafters are Aspen logs cut off our land.

The logs were bolted to 2x4 scabs, which were in turn screwed to a couple rounds of cordwood. This helps to both spread the weight of the roof out on the wall, as well as tie down the rafters.

Stackwall corners were something new and kind of fun.

The mix tuck-pointed well, in spite of the chopped straw..

Cons: A big pain to get the roof somewhat level and safe to walk on. Hardwood pallets are heavy and defiantly bend each and every nail you try to stick through them.

Also, you will notice that the front of the building is sandbags with an earthen plaster all the way up. This is to provide more thermal mass in the south-facing greenhouse back wall, as well as give us more experience with earth/sandbag building.

Finally got the pallets up and the slab fascia installed.

Over the pallets, we put down a layer of old carpeting, then a pvc billboard tarp for a waterproof membrane. Another layer of carpet over the plastic for extra protection, and finally a layer of hay bales for an insti-green roof. I imagine we'll seed it in spring..

Here's how it looked this afternoon:

Still need to put some windows and doors on..

I found this project exciting because of how cheap it was, and it wouldn't take too much more work to turn it into a warm and cozy cottage! The roof was practically free, minus the billboard and some nails.

Mary typing away here, on behalf of the younger dudes.... Maybe it was butchering the bird yesterday (a very satisfying feeling btw!) that had me thinking on the upcoming holiday. I hope this isn't too premature, but I thought it would be sweet to share what the younger kids are thankful for this year.

Johnny is thankful for:

3. My brothers and sisters

4. To be able to play with Lizzy and Donna

6. For Puff and Purr

Lizzy is thankful for:

1. Charity and love in our family.

2. My sisters and brothers who play with me all the time.

3. The farm and how much joy it grows in our family.

4. The beauty in our family and gardens.

6. All the animals and our healthy food.

8. Not having to go to school!

9. A big lake that we can go swimming in when it gets hot.

10. For being able to go sledding and skating.


Michael is thankful for:

5. For living such a great way

6. For creation and our souls.

8. Good looks. (laughing :) (and I might add, that I'm thankful for brother's sense of humor!)