The Story of the Little Tree House 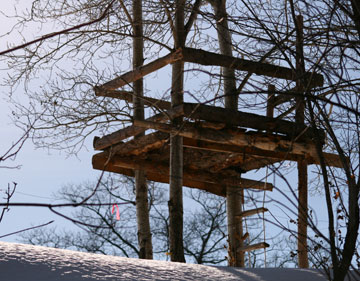 Once upon a time, there were three boys who decided their farm was in need of an above ground hideaway, a lookout, and a place to escape the company of their sisters (of course, they only said this because they could think of no better excuse for the erection of their tower, not because a hideaway from sisters was really necessary). After the barnyard animals had endured several days of hammer pounding, and their ears were quite curled with the ricocheting echo of the blasts, the boys proudly announced that their structure was almost complete. "Good," said their father, who was growing tired of his tools being hoisted up into trees. "Good," said their older brother, who was growing annoyed at their constant engineering questions. "Good," said their mother, who was growing weary of worrying about her monkeys climbing around in precarious heights. "Good," said the animals, who were growing tired of their ears curling from the pounding. "Good," said their sisters, "When can we come up and have a look?" Now, here is where we reach the finest element of our story. "Oh no," said the boys. "We're sorry, but you can not come up into our fort, because you see, the only method of reaching its high platform is to climb a single rope, with no knots, hand holds, or any other accessory of ease. Obviously, this is a tower meant only for boys with bulging muscles... like us." The sisters rolled their eyes and watched as the boys secured their rope, climbed down and removed the standup ladder leaning near the fort. The moment of triumph was at hand. Dad, older brother, the curly-eared animals and even Mom came down to watch. The oldest of the three was elected to give it the first try. He stepped up to the rope and gave it a good tug before casting a wry grin over his shoulder at his gathered audience. With a mighty heave, he lifted himself from the ground. His muscles bulged beneath his shirt. A deep groan emanated from within his chest as sweat formed on his brow. The younger boys gritted their teeth and cheered. The girls crossed their arms. The Father grinned. The animals yawned. After several more moments of struggling, he looked over his shoulder to see the ground only a mere foot beneath him. Desperation overtook him and he released his grip. Next up, younger brother took hold of the rope and climbed fast and furiously for several moments, before pausing for too long, despairing and dropping back to the ground as his older brother had done. I will save you the verbiage of the youngest brother's attempts, because, while quite funny at times, his little gym shoes never did leave the earth, making for boring sentences. After a short rest, the boys had at it again. And again. And again. Always ending in the same fate. Never reaching the top. As the attempts wore on, the smiles and grins began to grow on the faces of their audience until even the animals were beginning to feel quite entertained; their big sloppy grins widening around drooling mouthfuls of cud. When their audience began to thin, the boys, laying panting on the ground finally turned to the only sister still remaining, her smirk growing off the sides of her face. "Fine." They said, dejectedly. "Give it a try if you'd like. At least then we'll get some good entertainment and laughs for a change." Sister took a deep breath as she gripped the rope. The unfortunate boys never got their laughs in. By the time word got back to the dispersing audience, she was already pulling herself onto the deck of the fort. The audience cheered and the boys sulked. The sulking continued even into the next day as the melancholy bunch sat beneath their fort and built a ladder. 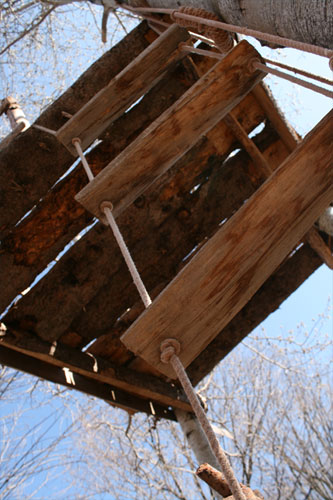