75 read the sweating little thermometer squinting into the blazing overhead sun. He heaved a little sigh as he wiped away the perspiration gathering on his plastic face. "By golly, if only this miserable war would end and give room for a little consistency around here!" he muttered to himself.

His reading declaring the sun's victory, was almost unnecessary, however, as the sound of dripping water, the chirping of birds and the squeals of t-shirt clad children filling the air were all quite accurate assessments as to who held the upper hand of the battle.


"For now," mumble the pessimistic cows...

--Yes, we're all as surprised as the rest of the scurrying wildlife world, I'm sure, at the warmth of the air for the middle of February in the U.P.  I'll bet plenty of the vegetation and hibernating animals will be duped by this mid winter thaw... but not me. I refuse to allow myself to become intoxicated with the jitters of spring this early into winter's breath. Call me a pessimistic cow...

... but I simply will not allow myself anywhere near my neatly packed away flower seeds, and the fact that I was basking in the sun on the porch and running my fingers over dead flower steams poking above the diminishing snowbanks means nothing... absolutely nothing.

We did manage to have a lot of fun with the temporary warm up! The kids went on a bike and horse back ride while the roads are clear. They saw tracks in the wet snow: first coyote (little dog prints in a pack) then further down the road, wolf, (single tracks, and much bigger dog) and then finally... cougar! (Eee!! They were very big, and a different shape and they founds lots of them, around his commonly spotted places. Looked like he'd passed through the night before maybe, though we're no trackers.)
We're not worried though. All of our animals are well trained in various forms of marshal arts and are well equippped to fend for themselves. Trust me. Any cougar coming around here would quickly regret it, being immediately attacked as he would be, by one of these monsters:

I'm pretty sure these things are living proof that dinosaurs once roamed the earth. Heck, they're more than likely reincarnated dinosaurs themselves!

Do not be deceived by such a tiny head with a smaller then pea brain--the noise they put out could account for a whole barnyard of animals! Their insistence that they eat ticks is the only verdict keeping them around. Though the other chickens will testify against them whenever they get the chance, so... I don't know, who are you gonna believe?


While Donna and I were out, we stopped in to see Baby, the bull, in the barn, (say that ten times fast!) and after a visit, we kinda, sorta, felt bad for him, you know, sitting alone in the dark and all, so we went and found the boys and asked them to take him out for a little walk in the sunshine.

What started out as Stephen taking Baby for a walk, quickly transpired into Baby taking Stephen for a run around the barnyard!

That little baby is getting fat fast on all his Momma's milk!

He will be shortly requiring a name change from Baby to Babe, methinks...

The other animals dropped jaws full of half eaten hay as Stephen and Baby raced past their pens.

They all raced over to the fence lines to inspect this, queer, smallish looking cow with great curiosity written on their faces.

Look at all the sheep gathered at their fence line with great big boogy eyes! (Have I ever mentioned that I just love boogy eyed sheep?! :))

As you can see, Micheal was a great help, standing in the background laughing and snapping all these pictures. Donna, who was all brave and friendly toward the calf when he was in his pen with the fence between them, suddenly leaped into my arms crying, "I 'cared, I 'cared!" as he and Stephen raced by. :)


She's adorable though, and you simply can't tell her 'no' when she has her sunglasses on...

After Baby was safely back in the comfort of his pen, Stephen went and got his camera and the boys enjoyed snapping lots of pretty pictures of the bright warm day...

And if I'm limited to only rhyming!

...this is just gonna get weirder and weirder, so I had better stop. ...Or this post will be a flop.

"I have no idea what she's talking about, but I don't think it's good," sighs the little pessimistic cow.
Anyway, whaddya say we tromp on over to the horse pen for a little sanity?

Good grief! Manners boy--where are your manners?!
Missy, where does he learn that kind of thing from?

...Makes a body want to go out and snuggle warmly under the sun's rays with them!

Frysta here, unlike Tryggur, is very photogenic. Mostly because she follows any and everybody around  if she is able, and in so doing gives the photographers lots of opportunities...

...and at any angle of her pretty head that they please.

We had a visitor to our farm one day, who witnessed one of the horses or mules rolling out in the pasture and I remember our company was so surprised, saying, "I just never imagined such a large creature rolling--with their long legs flailing in the air and everything!"
I had never thought of it before, but when I was looking through the kids pictures, and saw a rolling pony, I remembered our visitor's comments and thought maybe there are other people out there, like our visitor, who would get a kick out of seeing a large beast roll like a puppy in the snow.
So here, for your curiosity and enjoyment, are the steps of rolling:
Step 1. Pony laying in snow.

Step 2. An itch, like melting snow trickling down the spine, starts to irritate...

Before you know it, heels and hooves are in the air...
Step 3. Hooves gather toward the center of the belly as the arched back is rubbed deeper in the snow.

Step 4. Pony gets up quickly, embarrassed that she's been caught rolling on camera.

Step 5. Pony stretches out the kinks from her nap, arching back and gathering neck.

Step 6. Pony shakes off the snow from her roll. 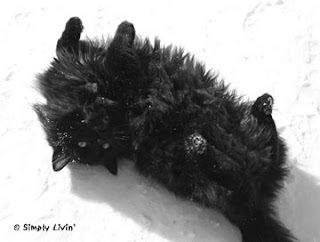 End.
All right, enough silly. I need to get outside and soak in the sun. Pace the porch...

...tapping my toe on the boards with impatience as I wait for spring.
...Or maybe I'll go look through my flower seeds... just real quick, mind you.
Ack, I think I need to go spend more time with those pessimist cows!
Posted by Hi, I'm Mary... at 11:56 AM