The House is Sinking! 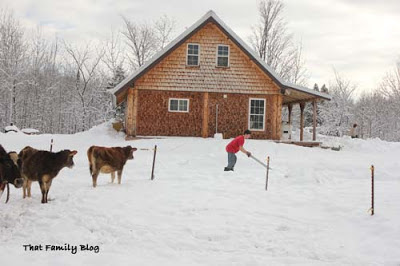 This is the time of year when it feels like our house is sinking as the snow level rises outside the windows. The steep pitch of the roof can suddenly place a huge bank of snow in front of our house within the space of a few seconds.

The other morning, Stephen stepped outside with his camera and his gentle closing of the door was just enough to send the snow off the roof, and his quickness with his camera resulted in these cool pictures! 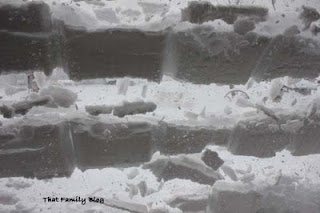 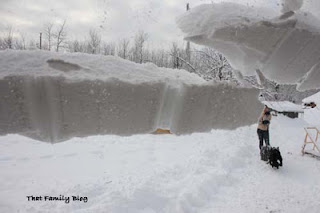 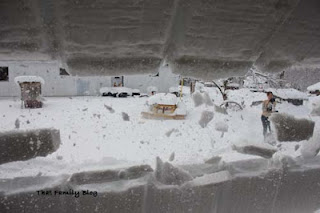 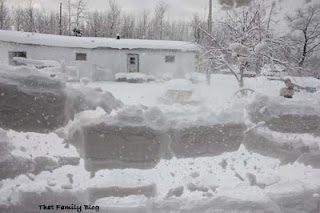 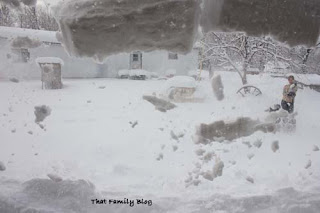 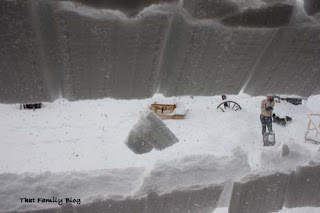 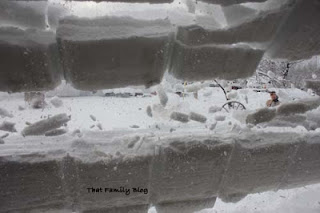 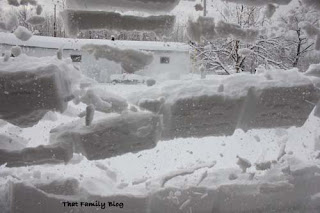 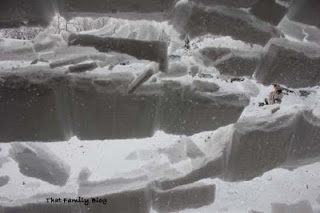 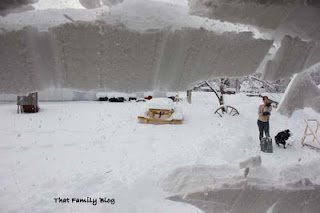 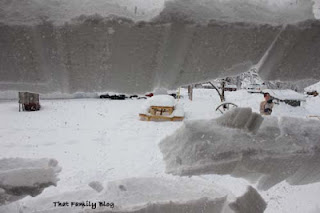 (Note the dog running in fright! haha)
The Kids walking past with their farm chore buckets are now missing their heads, unless you crane your neck in the window to look up out at them. And that five second fall of snow can add quite a bit of shoveling time! 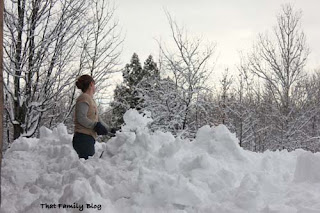 I remember back when a sunny winter day would bring out all of the sleds. Not anymore. This year it's snowboards. The curious ponies watch from the sidelines as the kids practice on one of their slopes in the horse pen. 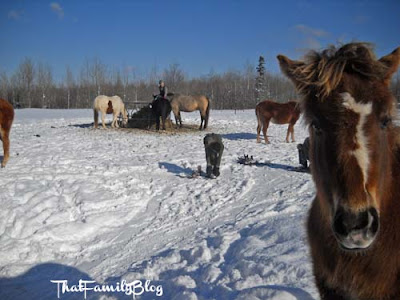 Snowboarding off the peak of the garage roof marks this winter as a very snow-y one. This feat has only been accomplish-able once before in our seven years living here, so this is pretty cool! :) From the peak, you could go either left or right and end up by either creek bottom. 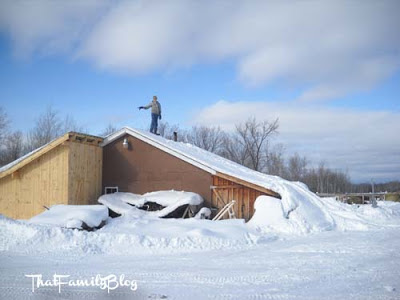 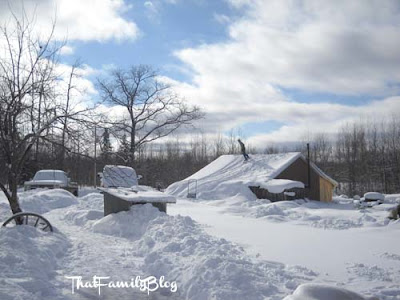 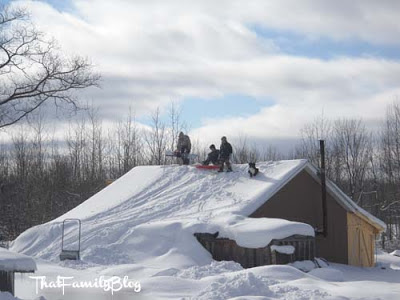 Even the girls are into this crazy sport! Only Donna and I have enough sense to stay away form it. ;) We stubbornly continue to scooch down the hill in our little sled, soaking our pants on the melted snow and having a grand ol' time. ;) Actually, most often we go for walks. I've been attempting to train Kady, (our dog) how to pull and she now singularly pulls Donna in her sled. Score! 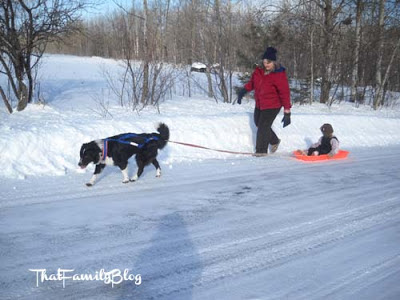 Our shops have been blessedly busy, employing everybody for their different skills for a few hours every day, but still leaving plenty of time for snowboarding, music making, and the evening board games. We were gifted with the opportunity to play at the Porcupine Mountains Snowburst Fest in exchange for free lift tickets, which was a big thrill for the kids to be able to snowboard all those big slopes and not have to walk back up them after each descent! :) 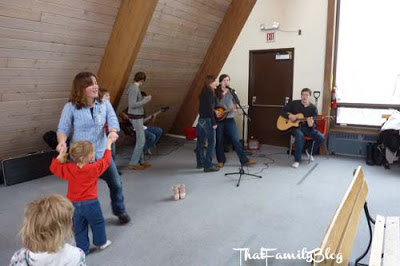 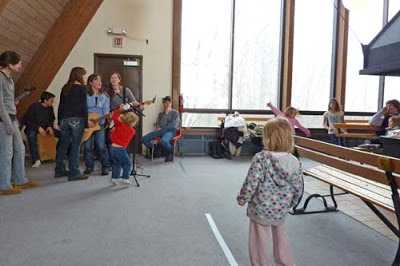 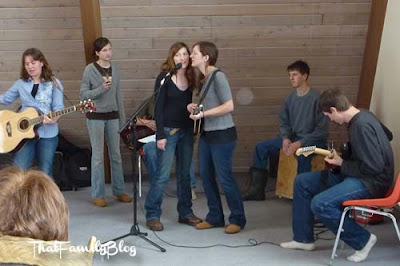 Valentine's day, I pulled out my bag of craft supplies and set the kids up to make cards while I wrote up a scavenger hunt. I used their cards as the clues and hid them about the house, ending with a few simple gifts. Some of their favorite clues were: "2nd shelf, 25th book from the left, pg. 72" (answer: the opening sentence was 'Papa went out to milk' and yes, the milk bucket held the next clue!). 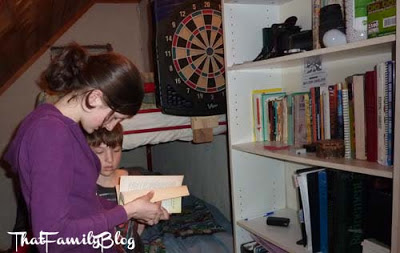 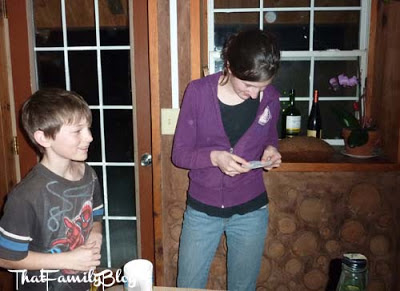 Prizes! I probably had more fun putting this together than they did doing it! :) 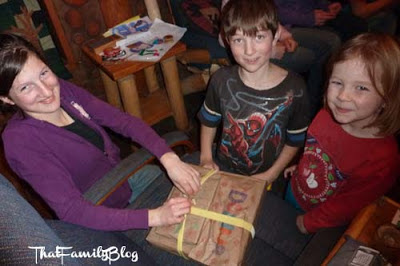 Despite the continued snow piling up outside, our minds are turning to spring. Plans are swirling in my mind with the same veracity as the snow pounding against the windows, demanding admittance during a blizzard. Where to put the potato patch this year, the new fencing for the smaller animals and the extra strawberry runners. So much to think about and plan! Sometimes the planning can become overwhelming, and it is those moments that help to squelch my impatience. We are very grateful for the off season to rest, plan and, of course, snowboard. ;) 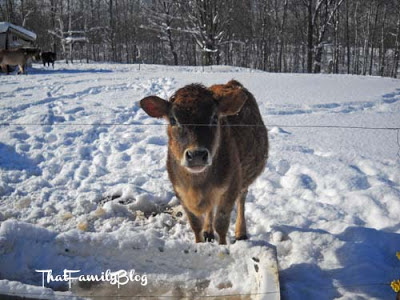 Our igloo grows with every snowfall and shrinks with every thaw, but continues to stand thick and strong. It's become tourist attraction for younger kids in the neighborhood, which we're happy about since the constructors don't feel that our youngsters use it enough. ;) 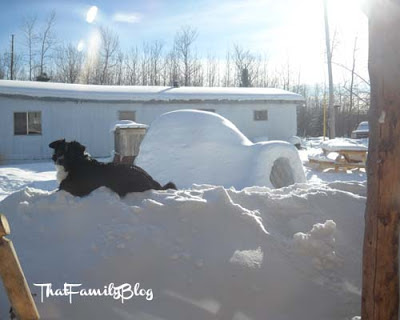 And, hey, just a note to say if anybody wants to follow us on Facebook, I am finding it's a lot easier to share short updates and pictures over there, so another way to stay up to date with our weird family and more convenient for me. :) 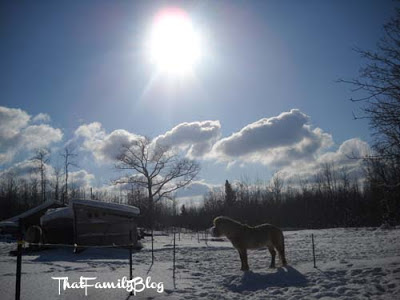 Warm today. Boys are going to stick a few taps into our bigger maples and see if we can taste the first sips of spring yet! Crossing fingers! :)

That's all for now--thanks for visiting!