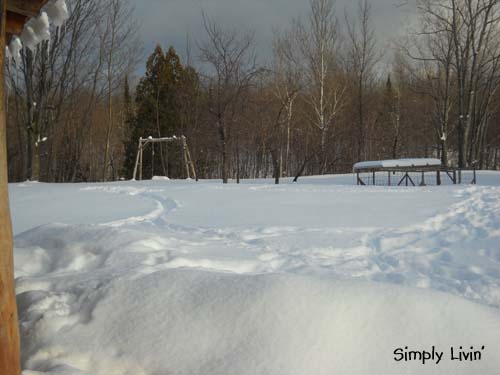 "I want to get a ton of snow," a random occupant of this household stated yesterday. "I just feel like getting dumped in."

It was a rather silly thing to say--I mean, aside from the phrasing of it--because lately we have been getting 'dumped in'. The world beyond our window panes has looked like a shook up snow globe for the past several days. Every morning I woke to a sky full of flurries, with trees, fences and animals all coated. The tracks in the snow from the previous day might as well never have been. Shoveling was a daily excuse to get out and get the blood pumping. Our puppy would fly out the front door each morning, eager to burrow in the virgin snowbanks, while each afternoon, snowboards had to test out the freshly coated slopes.

Dad took the credit for our recent abundance of whiteness, saying his desire brought it about--not yet ready to give winter up to our earlier Feb. thaws. The spring seekers among us are non to pleased with him. ;-)

As I walked yesterday--the first clear day after all the snow--I became aware of the stillness that our vast amount of snow creates. As though the whole world has been thickly blanketed in a sound absorbent fluffy whiteness. The woods were silent and lifeless, save for a few crows who took shelter in a tall pine as I passed. The trees and shrubs appeared to be sleeping peacefully--the soft clatter of their stiff limbs against each other in the gentle wind the equivalent of a lulling snoring sound. I felt like I was the only one awake. Despite the drowsiness that a winter scene can often bring on in a person, my thoughts were racing along with a surprisingly productive speed against the stillness. They seemed loud in my head in contrast with such silent serenity.

Winter walks are for thinking; Spring walks, I'm too preoccupied picking roadside bouquets. Summer, we usually preference bike rides over walking for a broader view of the nature. Fall walks are filled with hunting down the best little roadside apple trees and the constant crunch of the fruit. That's why the quiet winter walks, where one must move briskly in the cold and the woods are quiet under their thick soft blanket of shimmering whiteness putting them to sleep, are the best time for thinking.

Ultimately, the highest productivity of the walk came, not from the productivity of thought, nor the exercise, nor the appreciation and awe over all the still nature and the beautiful sunset, but the feeling of 'happy' that lingered with me afterwards long into the evening.

I'll best the cold for that 'happy antidote' any day! A few weeks ago, I took a walk with Daddy when it was ridiculously cold out and the snow was coming down in earnest. The snow was squeaky underfoot, it was so cold. The air was so frigidly fresh that I couldn't stop breathing deep gulps of it and enviably swallowing flurries along with each breath. I somehow found the whole situation quiet silly and I couldn't stop giggling stupidly. :)


More snow falling today... An outsider told us that everything out there is shut down, but nestled in here we don't even notice it. Just another snowy day. The random occupant has their wish.