Well, Christmas 2010 has come and gone and as it past, it snagged on and dragged with it the veil covering all our delicious December secrets.

With everything out of the closets, I am free to share with you all the lovely creations brought into existence by our hands in this past month. It truly is the most wonderful time of the year for us... We all just love how our handmade Christmases tickle the imagination and groom the creativity of the mind each year. I honestly immensely prefer the way we do our homemade Christmas gift exchange to the store-bought-gift-Christmases we used to do. It is so much more fun!

As the snow dropped gently toward the earth, one could hear the hum of the sewing machine and the hushed whispers and giggles of the girls behind their bedroom door while outside their loft window, the curl of smoke rising from the rusty shop chimney and the occasional buzz of a saw were the only clues to the creations being born within. We all had/have each year, so much fun making gifts, from the random and often hilarious ideas suggested during the planning stages, down to Michael hitting everyone in the shop with a tube of wrapping paper on Christmas Eve, explaining, "it is, after all, whapping paper!"

I got the honor of unwrapping the first gift on Christmas eve and I am bold and perhaps biased enough to insist that my sisters and I received the sweetest gift from our brothers of any girl anywhere. Though, I must admit, I was at a loss for guesses when handed this object. The main gift was a small round case turned on the lathe that held four little wooden purity rings, one for each sister. In tiny letters they say "Love is worth waiting for." Seriously, how sweet and precious of a gift is that to receive from your brothers?! Being the sappy girls we are, we were all donning silly grins and stroking our rings for the rest of the evening. The branch was a ring holder for all the rings the boys had made in the course of making the purity rings for us. Andrew had several with inlaid horizontal strips that were seamless and positively stunning. I could go on chatting about this gift all night, I was sooo impressed! But I've got to move on...

Andrew got a movie director's set, complete with an L.F.P. tote bag to replace the brown paper bag he normally carries around on set, an L.F.P. clip board for the script, binder for the story boards and note book for, well, notes. The girls painted on the logos freehand! I thought they turned out pretty sharp.

Donna got an adorable little farm board game. You have to be the first one to get your animal piece into the hay loft, but watch out for those hay bale chutes! Totally operated by color, it's simple enough for her to catch on to... if the older kids would stop playing it and hand it over... At this moment she is pushing her farm game into my
lap...

Donna also got a pull along horsey that bobs his head when it rolls. Yea, she's spoiled, but she did really well in the virtue of sharing considering that she's a 2yr old who just had a birthday. She was genuinely excited for everyone who got to open a present and never attempted to claim anything she wasn't told was, "for Donna!"
Stephen got pair of hand knit gloves out of our own homespun and lined with cozy soft alpaca which Theresa patiently knitted up in her room. Normally we make the kids mittens because they're faster, so gloves are a special treat. He also got an nylon cover for his camera to protect it while photographing out in the elements.

Annie got a new beautifully hand crafted version of the old battling tops game. Of course, all turned on the lathe. I can hear them playing it as I'm writing this. In fact, they've hardly stopped playing it since they opened it! I think this one is going to be going on our Etsy store. The tops are all different and come with their own pros/cons and personalities. The boys had most of them named already, from having played with them in the shop. "Oh this one's 'Frisky' watch out for him, you never know what he might do. Here's average Joe, he's nice and dependable. Oh, check out Sawtooth, he's a doozey!"

Michael got a new quilt because he needed one. He had asked for one, so it wasn't a huge surprise, but the Rangers Apprentice logo that Annie tediously hand stitched in the center was a surprise! (Rangers Apprentice is a cool book series the boys are into.)

Lizzy got a little pony barrel racing game. With four adorable little horses on wheels, a launcher, several barrels (which Michael turned on the lathe as his first lathe project) a start marker and flag, there are several games to be played: tag, capture the flag, croquet, knock over the barrels, etc. The boys admitted to playing extensively with this one in the shop. It's positively perfect! (Sorry, no picture.)

Johnny's gift required the most thought... he got a 40 page illustrated book about a hero complete with the hero's costume. He was thrilled and I was relieved when all the parts of his costume fit our young hero. Not to worry, our farm should be perfectly safe from all bad guys, thugs, pirates, and evil doers of every kind now that we have the masked avenger! I am listening to Mom read the story aloud as I type...

Theresa got a set of four brain teasers. One was easy enough for the little kids to figure out while the hardest one took Theresa a full day of fiddling with to solve. I still haven't figured that one out. I agreed with Dad when he said, "my brain is very sensitive--doesn't like to be teased!"


Finally, Mom opened a rustic chess set. The boys actually made two, the first one was rustic and a tad rougher, the second one was more perfect and conventional so they reserved that one for friends and kept the rustic set. By rustic I mean the pieces have a bit of bark around their bases and the box is made of rustic slab wood. They burned the pieces with a blow torch but discovered when they made the second set that putting them in the oven at 350 for 3-4 hours works better and darkens the wood a lot more uniformly. Stephen turned most of the pieces on the lathe. I couldn't believe how perfect they all were! The boys are really gettin' good on that lathe!

On Christmas morning the girls and I surprised the kids with a new set of homemade stockings stuffed with one small gift each, as well as a couple pieces of fruit and a foam rocket launcher that Theresa and I managed to invent out of craft foam, a rubber band and hot glue and which the boys and Dad are, at this moment, shooting around the house...

Oh, and I still need to introduce our new little friend. He was born just before Christmas, and thanks to him, or thanks to the new mother, we had a wonderful abundance of milk, cream and butter to make lots of yummy treats with over the holidays. Such a blessing! Keeping in the flower theme, his name is Baby's Breath, or Baby (to be changed to Babe when he's older.)

And before I sign off, here's some more pictures of cute animals and kids enjoying each other and the fresh snow!

So anyway, Merry Christmas everybody! Hope you all had great ones! :) 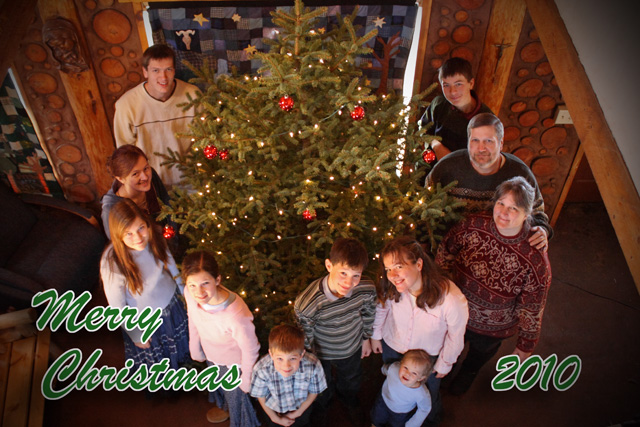 Oh, and if anybody didn't yet see our homemade Christmas ecard, it's in the post below me here on the blog. Please check it out and feel free to pass it on to anyone you know who might glean a little Christmas cheer out of it! :)